I’m making a deliberate effort to reduce the amount of time I spend on social media. Sometimes it feels like it’s working. Other times it doesn’t.

I imagine it’s a bit like trying to give up cigarettes, that sort of ephemeral, temporarily distracting fix. That numb and mindless addiction. Social media seems a necessary evil that’s hard to entirely avoid if it’s linked to your work, and if it’s a deeply embedded behaviour you’ve had for a decade.

Today’s broadly covered OFCOM report shows the dominance of the smartphone on our lives has never been greater. The headline for many is that the number of mobile calls we make has fallen for the first time. Our primary use for smartphones is no longer to make telephone calls. Perhaps it hasn’t been for some time. (You might also suggest this is also a symptom of clogged up mobile networks, poor signals and a dwindling faith in telecoms providers).

As explored in a previous post about a digital detoxing, my relationship with my phone is a regular wrestle.

Certainly it can become too much, too controlling, too instictive and ingrained. You have a spare nanosecond so you take out your phone and open an app. And how do you feel afterwards? Invariably worse. This is the case for me at least.

After a scrolling binge on Twitter, and to a slightly lesser extent Instagram, I usually either feel a bit sad and inadequate: how I am so woefully unsuccessful compared to that other person who I admire or envy, how they are doing much sexier, more interesting, more important work. 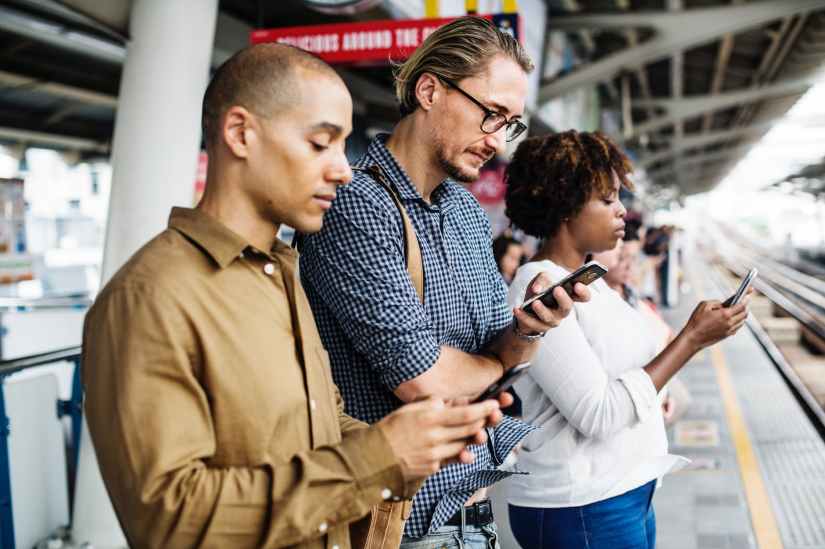 Or I would feel more generally glum about the world and all its super dumb people, in that toxic aggressive sense, the mass popularisation of unfathomable stupidity – Donald Trump. And / or glum about its pallid anaemic weakness, its volume of empty bland forgettable messages commanding unfathomably large audiences. (How is this guy such an important ‘influencer’ when he spouts such utter drivel?)

So I have started using it less, which is actually easier than I imagined. I feel more free of noise and don’t miss it at all. Sure, I dip in and out now and then but less instinctively and not when just faintly bored, to fill a moment or two.

It’s been several months since I deleted the Facebook app from my phone, which felt liberating, somehow eliminated an obligation. I still look in on the desktop, usually to manage a page or take a look at a group, and still look at my personal feed.But there are no regrets about not having it on my phone. Those urgent needy red flag notifications grew bizarre and infuriatingly irrelevant: Friends I May Know (who I certainly don’t know), a casual acquaintance has posted yet another photograph of their child. That’s great Facebook, thanks, bye.

Facebook is like a boringly repetitive loudmouth in the pub who keeps a terrifying photo shrine of you and all your family in his basement. I have no interest in going to that pub anymore. Its user numbers stock market value indicates I am not alone.

Social media increasingly leaves me feeling flat. But it doesn’t have to be that way. You don’t have to depress yourself like that – unless you are a social media manager for British Telecom or something.

If it’s not your job though, why would you? Just put your phone down. Or you have a second thought about picking it up in the first place. You control yourself, reach for a book. Maybe give yourself a certain strict period of time (there are lots of apps for this), perhaps read only one fairly neutral platform for news, if possible.

You can reprogram and rewire, at the very least taper and develop an awareness of your usage. Decide not to care how many likes you get because it is all fairly meaningless. Dare to post without a hashtag.

Otherwise, you risk investing a disproportionate amount of meaning amongst the frighteningly lost hours lost staring into that screen. The link between rising mental health issues and excessive use of smartphones and social media is blindingly obvious.

These devices and their applications are engineered to tap into our insecurities and neuroses, to hammer us with notifications and never leave us alone. We are forgetting how to communicate, or never learning how in the first place.

It is not easy but we can choose to resist. We can look back to go forward. I find continued comfort in books, glossy paper, print. The old school hard versions and the Kindle versions. They don’t usually distract you with links and send you scurrying away down another rabbit hole of information. Also ebooks or podcasts. Take a walk and a listen and look at the world around you, instead of that screen.

Remember you can and probably should turn off that thing altogether from time to time. There’s lots of other stuff out there. It is not your God, it’s a phone.

While the title of the annual market analyst forum suggested a certain current harmony between the cloud, social media and analytics, a series of analyst viewpoints indicated that the developing multi-device landscape might be a little more complicated.

END_OF_DOCUMENT_TOKEN_TO_BE_REPLACED

A technology-packed room recently opened at The Parc Hotel, Cardiff’s member of the Thistle chain. With strong interests in travel and tech, I was invited along to take a look.

“A grand Victorian building with a distinctive French-influenced façade, The Parc Hotel is a Cardiff landmark. Following a massive refurbishment, The Parc Hotel is universally recognised as one of the premier hotels in Cardiff City Centre.”

END_OF_DOCUMENT_TOKEN_TO_BE_REPLACED

New technologies constantly collide and drift apart again, some sticking together for longer than others. We crave golden solutions which cram everything into one swiss army knife of goodness and often come close to finding it, before realising it can’t quite do everything.

END_OF_DOCUMENT_TOKEN_TO_BE_REPLACED

Those with mobile ears to the ground consistently receive mixed messages about the health of SMS.  General traffic numbers still look ok, mobile operators clearly still make some money from it – though that’s been dented, the number of applications and functions it can help facilitate is still impressive.  Yet still the naysayers remain.

Issues are muddied by context, of course – primarily the difference between person-to-person (or peer-to-peer or P2P) messaging, and aggregator-to-peer (or A2P) messaging.  The latter is commonly used for automated and system-integrated messaging, whereas the former is you texting your friends.